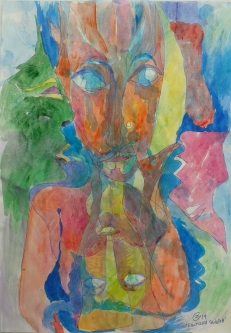 When I returned to Athens
three years later
from an involuntary stay
that placed me at the mercy
of the state
I had no part in its present
assembling –
I had to swallow hard.
Friendly people assisted
with their welcome
however hard it was to find
my goods I had to leave
previously behind.
The vagaries of time had
folded and refolded all
my favourite clothes
looking like a heap of rags.
But love prevailed above
anger and frustration and
the utter revolt of the flesh
as Albert used to state.
Jo came with laboured gait
to help me at that moment
when I had to admit defeat
in the undefeated city
to gather renewed hope.
Jo and Maria – North and
South – at crossroads of
intellect and the practical art
of living.
Anna and Mimis
these two good spirits
whose metaphysical love
will guide us along.
If Anna said: Is love death?
She meant the absolute of
questions
which seems absurd.
If Mimis said: I will kill all Turks
he meant not patriotism
but solely his concern about
Greek’s survival!
This story of love and friendship
is a unique experience in a
lifetime
a quartet of thoughts.

New Year came without a fanfare.

This New Year has arrived during a night, when the first snowflakes fell silently to the ground. I sat at my desk in the kitchen, close to the heating unit below the window. I wrote into my journal. Last year had become more difficult, as we have aged with greater speed, or so it feels. Joints make cracking noises when one gets out of bed in the morning and I am too lazy performing my exercises my physio instructor gave me to improve the flexibility in my legs and body.
B is complaining about nerve-pain all over her emaciated body, especially her toes gave her problems and on top she has caught some influenza, which keeps her nose running like a pipe. I feel a bit hung over, after I had half a bottle of malt whiskey, not a strong one, but still enough to make me feel woozy. This year I have to finish a lot of drawings and paintings, but I have to find the groove first, in order to get fully into the act of an intuitive flow, when I am inspired to do art.
I had been snoozing on my bed late evening and woke up to the noises of crackers and firework in the neighborhood of Weidling, where I would not have expected such a cracking out of hell. But land-folk is bored, I suppose and New Year’s Eve is an excuse to let loose and crack and bang as if they wished to frighten the bad spirits and chase them away for the year.
B has tried hard to be loving and tender, quite a surprise after a year of avoiding any talk and discussion that unfortunately ended with disagreements and a shouting match, with raw accusations on both sides. What will the New Year bring? B brought in the morning a fir-twig as a symbol for peace at X-mas. “Whenever we are about to argue and fight about something, we will look at the fir-twig that should remind us that we promised not fighting any more”, B said. “Agreed”; I replied.
It seemed that B had found the magic to deal with our self-opinionated positions, when arguing. If we wished to live together after 47 years of marriage and reach our 50th anniversary, when we have to try harder to act with tolerance and understanding, especially living together in a bedsitter of 42 m2.
In general we can go on with each other, especially as we have created our specific corners, B at one side of our double bed, while I had created my domain at the window side of the small kitchen. It had worked as a retreat from arguments, whenever we happened to get into each other’s hair. Perhaps I had been relieved to avoid an argument, whenever I sensed an oncoming tension, fleeing into my corner in the kitchen and work on my poetry, prose and translations. At times I painted a series on a theme and lost myself in the euphoria that creative drawing and painting provides.
That was exactly what B wished to avoid again. She needed attention and tenderness. Had she not said that she wished I left and never came back again? Of course, but it was only her anger about having lost our possessions and our good life in the South of Africa. We had our own en-suite bedrooms and work spaces in a townhouse, our own pool and garden, a garage and a cottage, where I had my studio.
Whatever we had, collecting fashion and books, fine furniture and art, but we had lived next to each other, forgetting the partner, the friend, the husband, the wife.
Now we are forced to live together on minimal space, under one roof and we have to respect each other, stop nagging about the partner’s work and habits. I think that B is unhappy not to live in the city, where she could follow fashion trends and visit a coffee house for reading her favourite magazines. She had been used to a sophisticated lifestyle, she had traded in for walks along the Viennese Woods. It’s good for her health, besides she needs a lot of fresh air. But then as I take the bus to the Underground station, she complains that she is always left behind. Well, I am a voluntary helper at an art gallery and she would only spend her small social benefit payment on transportation and coffee. “It’s impossible to live like this”, she utters and complains about boredom of living in the countryside.
For me it’s different to B, as I have my poetry and writing pages on the Internet, where I post them on WordPress.com and enjoy when I see some interest in my literary work. Every half year my creative activity changes to painting and I execute the canvases I had planned before.
But since we came back to live in Austria again, I have stopped to draw up a list of New Year’s resolutions and B followed suite. This year of 2016 will be a better year, the economists predict and that is also fine with me. There will be interesting projects and I will need to show my Apollo Frieze paintings, I had done 2009 in Athens, to a curator I had met at the Essl -Museum. Besides, a gallery nearby asked me to bring my work around. There’s still hope for the artist in me.
B will have to look after her health and carry on with her fashion interest. She found a new shop where she detects her fashion which looks good on her model size.
We have tasted to a happy New Year and will we contribute our best for it to happen?

She’s a dusky-eyed beauty
Elfin of the Art Shop
fleeting between canvases of
expressionist art.
Nica just escaped the pages
of a minimalist fashion shoot
self-assured
one hell of a gifted communicator.
She’s been at this historic spot
of Vienna’s Jewish Quarter
for some time now
part of the scene
part of a unique gallery.
Nica has a way with friends she can
make easy keeping them forever
like Chicago-Kurti
who is keen to take her out.
Like von Markuczi
collector of Classical paintings
and jester of Inverted talk
bearlike funny if you know him.
I am glad the poet is stirred
the painter is excited portraying
her to his canvas
render her immortal.
She’s a dusky-eyed elfin who
saved a few lives giving from her
heart.
She’ll receive this love back
more than a thousandfold.

Interesting morning
joie de vivre – dream
women’s faces kaleidoscope
morphing into one for the
present: Nica?
She’s the reason for my
hopeful existence
the motor behind her
elfin state:
Eyes of fire that kindle my
spirit
reload the generator of my
creative state in art
spark-off my poetry
love will prevail.
Let’s dance and celebrate
the year-end
aside the frenzy
cast one’s soul around
happy thoughts
paint flowers of joy and love
that are amiss from one’s
own spouse
who demands love
but is unable to give it at
present.
I am away hasting to the bus
to be with Nica
even just for a short while.
Servus Kierling.
Servus all. 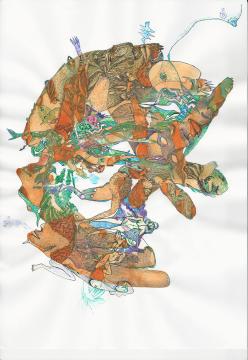 Joined a woman waiting
for the bus
late this morn’
she asked if I would leave
for the airport
no I replied this’s my holdall
I throw all my stuff into
she called a taxi
come with me to Stadtplatz
she said.
Thanked her introduced myself
asked for her name
Weisskirchner she said and left
across the pavement with her
dark-blue walking cane.
Good things happen
even if this morn’ it supposed
to snow
but rained instead.
Martha showed me point-massage
we talked Hungarian
nice girl would talk more
but had to go.
Talk more to strangers than
I talk to my spouse
although we are together 47 years
imagine!
What do you make of it Albert?
I hear the jagged voice of Miles
asking the same ques to his record
producer completing a jazz session.
What would I listen to if not to
Miles?